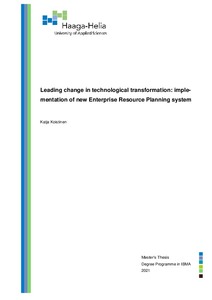 Koistinen, Katja
All rights reserved. This publication is copyrighted. You may download, display and print it for Your own personal use. Commercial use is prohibited.
Näytä kaikki kuvailutiedot
Julkaisun pysyvä osoite on
http://urn.fi/URN:NBN:fi:amk-202105178997


The model was observed and tested at the case company, where a qualitative interview
was conducted. The interview questions were based on the model and related to user habits, implementation process, deployment of the new ERP and interest in trainings. The interview results were qualitatively analysed, after which a second and final version of the
change model was created. The research was conducted from the perspective of an involved employee, where the researcher was part of the implementation project.


As a result, a new change management model was created which the study supports. The outcome of the study highlights the importance of proper change management plan and communication in the organization. The case company received suggestions with regard to utilising the new model, as well as development ideas for similar technological changes in the near future.