How the Somali Remittance Works in Western Countries? 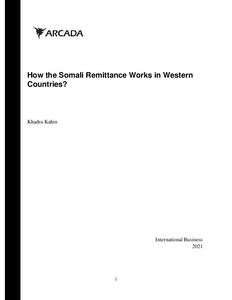 Kahin, Khadra
All rights reserved. This publication is copyrighted. You may download, display and print it for Your own personal use. Commercial use is prohibited.
Näytä kaikki kuvailutiedot
Julkaisun pysyvä osoite on
https://urn.fi/URN:NBN:fi-fe2021051830368

The research investigated the barriers and the challenges that Somali Remittance Companies face and how they operate within stringent rules and regulations. Also, the research examined how the Somali diaspora sends money to their families who live in Somalia. The study also aimed at the various companies that transfer money, focusing on the systems they use, such as digital or regular transfer money.
Furthermore, the research also focused on the expansion that the Somali Remittance Companies have made since their business's birth, which approximately dates from the 1970s.
The research highlighted the various factors that affect both the customers and the Remittances Companies and how those challenges weaken the home country's economic growth that often depends on the money transferred for the diaspora communities.
The data is collected from in-depth interviews with five respondents to get more information about how the remittance companies function in general. The theoretical part is based on existing research, journals, and other relevant documents. The study demonstrated that a large number of the population who live in Somalia depend on the money that is transferred from abroad.

The results of the research highlighted that five different companies were participated and shown that both male and female customers remit the same amount of money to their families. Also, their age group was categorized into two groups, 25 to 64 and 18 to 24, based on their income. Another critical aspect of the results shown that remittance business is easier and less bureaucratic when the customers want to send their home countries as there are no official banks for the money destination.