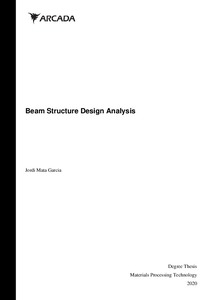 A hypothetical scenario of a 30 m long, 10 m deep gap is proposed and a structure is to be created to allow pedestrians to cross it using not only the traditional beam analysis methods but also the standards and conventions proposed by the Eurocode 3 standard book, which have to be complied by the structures built within the European Union in order to be approved as safe. The structures must sustain a uniform applied load of 4 kN/m2 as is the safety protocol for pedestrian bridges. A total of 3 different bridges constituted by I-shaped beams per the IPE profile standards, which is one of the most standardized profiles concerning bridge design specially concerning trusses, are proposed and verified through the European standards: a simply supported bridge with 2 sections of 2 supports evenly spaced out, a simple cantilever bridge with a single support base with two columns, and a Truss bridge separating the 30 m into 6 sections of 5 m long by 5 m high squares. All the bridges have the same 10 m x 4 m bridge deck in common, with 3 supporting beams. The initial profiles on the bridges and the deck rendered by the traditional method of analysis are then progressively increased to fulfil the standards established. A final choice of IPE450 beams for the bridge deck, IPE300 for the simply supported bridge columns, IPE600 for the simple cantilever bridge and IPE300 for the truss bridges are selected, all of them verified also through FEA analyses using COMSOL and SolidWorks software tools in order to obtain a Factor of Safety rating above 3.0 in all the members of the structure. The simulation task brought up the high potential and considerations of the European standards, as the beams had enough capabilities not only to conform to a very solid and stable structure but also to withstand the effect of gravity on the structure. No bridge option was markedly better than the next one in terms of stability, each of them having its benefits concerning the supporting system depending on the terrain conditions: simply supported bridge in case there is an obstacle in the centre of the gap, simple cantilever bridge if it is the support that must be located in the centre, truss bridge in case a supporting structure is not a feasible option.