IFRS 16: changes to the financial metrics of retailers 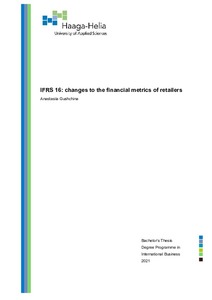 Gushchina, Anastasiia
All rights reserved. This publication is copyrighted. You may download, display and print it for Your own personal use. Commercial use is prohibited.
Näytä kaikki kuvailutiedot
Julkaisun pysyvä osoite on
http://urn.fi/URN:NBN:fi:amk-202105189182

International Accounting Standards (IAS) and international Financial Reporting Standards
(IFRS) are a major part of accounting all over the world and changes in these standards
affect plethora of businesses. The objective of this thesis was to research the effect on financial ratios and metrics of Finnish retailers caused by IFRS 16 Leases which superseded IAS 17 Leases.

The findings revealed significant changes in multitude of metrics and ratios: profitability ratios increased, whereas the changes in debt-related metrics such as gearing, debt-to-assets became indicative of riskier companies. Increased debt load in form of increased
lease liability was the underlying reason for such effects, and the changes in operating expenses and depreciation affected the profitability.

The publicly available data does not disclose all the necessary information; therefore, the
results of the research are not completely accurate. However, they are still indicative of approximate changes caused by IFRS 16.