Market Analysis: A study of the Gulf Cooperation Council Members as target for FinContainer product. 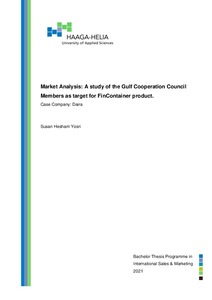 Yosri, Susan
All rights reserved. This publication is copyrighted. You may download, display and print it for Your own personal use. Commercial use is prohibited.
Näytä kaikki kuvailutiedot
Julkaisun pysyvä osoite on
https://urn.fi/URN:NBN:fi:amk-2021052010045

The countries that make up the Gulf Cooperation Council hosts over 50 million residents. These countries, including Kuwait, Bahrain, Oman, Qatar, Saudi Arabia, and the United Arab Emirates, are also located in an area that has limited access to fresh surface water reservoirs, which means, that they have been relying increasingly on treated water that has been cleansed through the process of water desalination to meet their growing clean water needs. In this thesis, a qualitative research approach that relies on qualitative data derived from surveys and previously published credible reports has been employed to generate insights on the most effective market entry strategies that, Daira, a Finnish circular economy company, can use to introduce its advanced water desalination tech-nology into the Gulf. This technology, which can easily fit and be transported using a regular shipping container, promises a future where the region can leverage its proximity to large water bodies to generate vast volumes of clean water that can sufficiently satis-fy the region’s freshwater needs. The study has shown that there is a huge water scar-city problem among the Gulf countries, a factor that amplifies the potential demand for Daira’s product, but there are also established water desalination companies that have been offering their services in the region for decades. Based on the findings of the study, the optimal market entry strategy would require the company to adopt a market pull posi-tioning for its FinContainer. Market pull can be described as the need for a new solution to a problem in the market, and FinContainer can play this role by being marketed as a product that individual consumers and small communities can use to implement their small-scale water desalination projects.