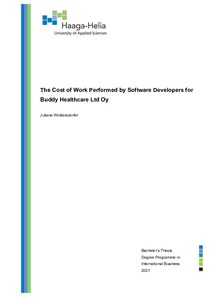 Wolkersdorfer, Juliane
All rights reserved. This publication is copyrighted. You may download, display and print it for Your own personal use. Commercial use is prohibited.
Näytä kaikki kuvailutiedot
Julkaisun pysyvä osoite on
http://urn.fi/URN:NBN:fi:amk-2021052611253

The thesis consists of a theory section and an empirical section. The theoretical section provides in-depth knowledge on the topics of supply and demand of labour, employee recruitment, and the costs of in-house employment as well as outsourcing. Within the empirical section, the focus is laid on presenting the results and deliver answers to the research objective.

The research design was divided into two parts. Internal information and interviews with the company CEO and CTO provided data to address the in-house employment of a software developer for Buddy Healthcare in Finland and Germany. The second part of the research was performed as desktop study applying compiled datasets to identify suitable countries for outsourcing as Buddy Healthcare and to calculate the cost of work performed by software developers in the selected destinations.

In the recommendations to the company, it is suggested to strongly engage in employee retention to avoid the costs of employee separation. Furthermore, it is recommended to hire a software developer in Germany if the demand for a German-speaking IT professional outweighs the high costs. In terms of sourcing software developer services, the recommendation is to receive services from Eastern Europe or Baltic countries, reasoned by
the low cost.