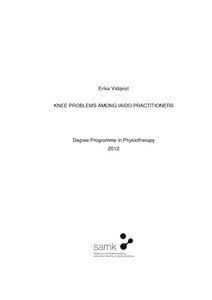 The purpose of this thesis was to study the incidence of knee problems among iaido practitioners. The study was made in co-operation with the Finnish iaido federation. The amount of scientific studies made about the subject is very limited and therefore inspired the study. The data for the study was collected by an epidemiological sur-vey, which was visible as an e-form to all of the practitioners practising iaido in Fin-land. The survey was available for two weeks in November 2011. When the e-form closed, 81 had answered to the questionnaire, approximately 160 practitioners received the information about the survey.

Data analysis was performed with the Tixel 9 statistical software which hides the mathematics behind the analysis. According to the results, 53% of the practitioners have knee problems. The incidence of knee problems increases with age and those who have practised iaido less than five years have the most knee problems. The study also revealed that certain techniques, such as sitting positions and techniques performed with knees touching the floor are connected to knee problems. Still, some have found iaido relieving their knee problems. However, it remains unclear how many suffer from knee problems only due to iaido. It needs further research what is the effect of gender, other sports, other martial art practices and if there are differences in training habits.