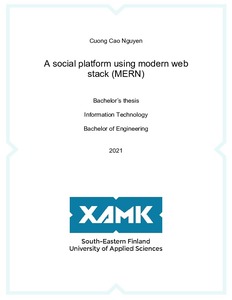 Nguyen, Cao Cuong
All rights reserved. This publication is copyrighted. You may download, display and print it for Your own personal use. Commercial use is prohibited.
Näytä kaikki kuvailutiedot
Julkaisun pysyvä osoite on
http://urn.fi/URN:NBN:fi:amk-2021060414464

The objective of this thesis was to use modern web stack (MERN) to develop several
features of a social-platform-like application. The work could be a reference for anyone who is getting familiar with MERN stack. It showed the process of building a front-to-back application from the beginning.
Before doing the implementation part, the background knowledge about each core element of the stack was outlined. A database system to store data was introduce, frameworks and libraries to support interacting with the back end and the front end were mentioned also. In the implementation part, needed tools were listed, the process of setting up environments was shown, the approaches to build the features of the application were explained.
After developing several features, conclusions and comments were made about the
process and the technologies.