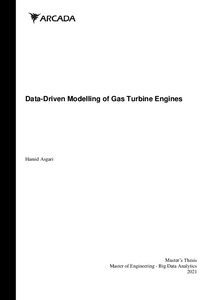 Asgari, Hamid
All rights reserved. This publication is copyrighted. You may download, display and print it for Your own personal use. Commercial use is prohibited.
Näytä kaikki kuvailutiedot
Julkaisun pysyvä osoite on
http://urn.fi/URN:NBN:fi:amk-2021060815126

This study investigates and compares linear and nonlinear data-driven models of a gas turbine engine. These linear models consist of Ridge, Lasso, and Multi-Task Elastic-Net models, which are set up based on linear regressions. The nonlinear model explored in this study is a recurrent neural network (RNN) model. A comprehensive code is written in Python programming language and run in the Jupyter Notebook; an open-source web application for creating and sharing documents.
The data employed for this study are open-source experimental time-series datasets of a single-shaft gas turbine. These datasets are composed of hourly average sensor measurements of eleven variables. However, in this research, only nine variables, which are directly related to the technical parameters of the gas turbine are considered, as the main objective is to model the system dynamics. Five of the features are considered as the system inputs and the four remaining features are used as the system outputs. The five datasets were collected over five years from 2011 to 2015, totally including 36732 records. Three of these datasets are employed for the training process and the remains are used for the validation purpose.
The results of this study demonstrate that the prediction of the dynamic behavior of the gas turbine for Ridge, Lasso, and Multi-Task Elastic-Net models are almost similar and satisfactory for three out of four gas turbine output parameters. However, the RNN model predicts the system dynamics with higher accuracy compared to other models and that the results are satisfactory for all of the output parameters. The conclusion demonstrates that the nonlinear RNN model has a superior capability in capturing the complex nonlinear dynamics of the gas turbine compared to the three linear models.