How to combine corporate cultures after acquisition? 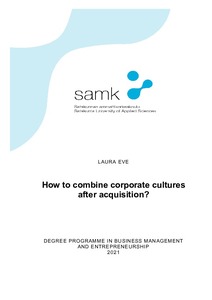 How to combine corporate cultures after acquisition? (2.666Mt)
Lataukset:

Eve, Laura
All rights reserved. This publication is copyrighted. You may download, display and print it for Your own personal use. Commercial use is prohibited.
Näytä kaikki kuvailutiedot
Julkaisun pysyvä osoite on
http://urn.fi/URN:NBN:fi:amk-2021060915359

Every organization and company have their own culture. The study focused on determining cultural factors that must be considered when combining corporate cultures after acquisition and whether this study could provide tools for improving these actions in the case company. The study was conducted to a Finnish IT company which has been growing rapidly during its six-year existence. While focusing to growth and expanding internationally, maintaining, and developing cultural aspects has been somewhat neglected which has caused the sense of not belonging to the mother company and fragmentation of the teams.

The study gathers few of the most known cultural models including also psychological safety and change management in the organization. After investigating the entity of corporate culture and interviewing some of the employees that have been transferred with acquired company, there was an action point list and suggestions made for the company to use in developing their own culture.

During the process it became clear that the topic is very vast and the main question of how to combine cultures within co-located and hybrid teams have been pondered by various professionals for decades, without receiving clear idea of how to do it. Therefore, the study turned from detailed guide into describing those multiple ways of how to increase the sense of belonging and combining factors within the organization and providing a comprehensive understanding of those factors that are needed in building, modifying, strengthening, and affecting to corporate culture.

I conclusion, the main question presented in the title of this thesis was not answered directly and in simple way, but the study presents various aspects of how the combining can be alleviated on behalf of the management and how the company can increase their own understanding and actions towards more united company culture.