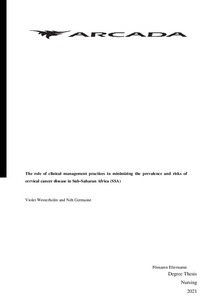 The healthcare system of most African countries suffers because of manmade problems that encompass political and technical developments, financial resources, human resources, and developments that are linked to politics. According to Walboomers et al. (1999), clinical management of cancer in Africa takes three main forms, most like in other parts of the world. These include primary care, secondary care and tertiary care. The first focuses on reducing infection rates, thereby lowering the prevalence rates of the disease, and this can be achieved through HPV vaccine mainly. The second focuses on detecting the cancer early, or even before it becomes a cancer. This is achieved through screening exercise. Based on the result of the test, treatment is done using viable methods, and WHO has approved some viable options to help clinically manage cervical cancer in African regions, and this includes visual inspection with Lugol’s iodine, and visual inspection with acetic acid. The third is done for women who are found to have invasive cervical cancer or precancerous lesions. This study attempts to underline the role played by clinical management and nursing intervention strategies in minimizing the prevalence and risks of cervical cancer disease in Sub-Saharan Africa (SSA). The study applied literature review and inclusion and exclusion criteria to collect data. The found that healthcare providers play a key role in reducing the prevalence of cancer among women as understood in three forms including primary, secondary and tertiary care, but detection of cervical cancer occurs late due to insufficient infrastructure. The study further reveals that patients in SSA are unlikely to get chemotherapy, radiotherapy or even hysterectomy. Thus, the treatment option is palliative and pain management Care.