How and why veganism came to Finland: a case study using memetics 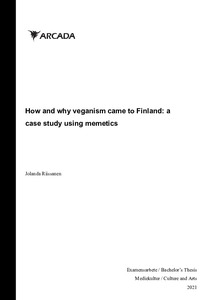 How and why veganism came to Finland: a case study using memetics (1.068Mt)
Lataukset:

Riissanen, Jolanda
All rights reserved. This publication is copyrighted. You may download, display and print it for Your own personal use. Commercial use is prohibited.
Näytä kaikki kuvailutiedot
Julkaisun pysyvä osoite on
http://urn.fi/URN:NBN:fi:amk-2021061115693

This thesis aims to explain how and why veganism came to Finland with the help of memetics through the questions: How does an idea catch on?, What makes a specific idea catch on and not others?, Was the popularity driven by distributors or consumers? and Is it a meme that is driving both distributors and consumers?. The purpose of this thesis is to contribute to the discussion about, and possible ways of, using the memetic perspective to analyse different cultural phenomena in the world. The thesis is limited to Finland due to it being the area of interest and the limited timeframe available for the completion of the thesis as well as the limited access to data and interviewees during the same timeframe. The research material consists of a literature review and interviews. The main theory being used is memetics. The results suggests that an idea catches on through imitation and that a specific idea that catches on is a meme that have won in the competition between other memes. Rather than it being the distributors or consumers that have made the trend explode, the question has shifted from being only about animals to include animal welfare, saving the Earth and one’s own health. New terms have been added to the debate, such as reducetarian and flexitarian. We might see that the behaviour to consume less meat or become vegan is not only one meme, but rather a group of memes working together: a memeplex.