Using the Sharing Economy as an Innovative Marketing Approach for Traditional Companies. 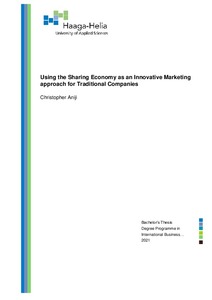 Aniji, Christopher
All rights reserved. This publication is copyrighted. You may download, display and print it for Your own personal use. Commercial use is prohibited.
Näytä kaikki kuvailutiedot
Julkaisun pysyvä osoite on
http://urn.fi/URN:NBN:fi:amk-2021061115737

The emergence of the sharing economy phenomenon has posed a big threat to already existing companies who are not in the business sphere as this was made possible through the progression and innovation in Information technology.
The research aimed to find which suitable sharing economy elements that could be jointly collaborated in a traditional company in the durable goods sector in Helsinki area of Finland and to find what consumers think of sharing practices of renting and swapping in other to get new insights that would be fundamental for marketing purposes in creating new value and propositions for customers.
The scope of the thesis was first studied theoretically using desktop analysis to gain new insights on past academic and current sharing economy topics. Companies that are involved in the sharing economy in one way or another were compared.
Furthermore, the study includes a theoretical structure as well as sections on desktop and empirical research. The sharing economy, collaborative consumption, sharing economy models, traditional economy, and the product-service economy are all discussed in the theory section.
Secondly, a survey containing 13 questionnaires was distributed among 150 consumers in the Helsinki city axis to learn about their views on sharing activities such as renting and swapping for consumer durables in the smart connected products (SCP) group. There were 52 responses, resulting in a 34.67 percent response rate, which were then analysed using descriptive analysis in accordance with the thesis objectives.
The desktop study's key findings and observations revealed that the sharing economy and the traditional economy are similar, and both can use product-service models to meet consumer needs. Information technology has been a key innovation driver of this consumer upshot and has fostered the utilization of smart product service systems (SPSS) as a vital sharing economy element for traditional companies to utilize in mitigating the threats of the sharing economy.
Furthermore, the findings of a consumer study on renting and swapping revealed that consumers find renting to be much more familiar and appealing, and that they place a high value on imperatives on economic factors such as price when making rental decisions.
The author suggests that the thesis study results be focused on recommendations of the outcomes rather than universalizing them to the whole population because they may differ based on a larger sample and the use of other variables and factors.