Cultural differences between Finland and Japan in communication style 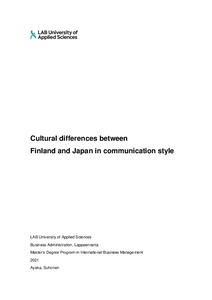 The thesis: Cultural differences between Finland and Japan in communication style (1.356Mt)
Lataukset:

Suhonen, Ayaka
All rights reserved. This publication is copyrighted. You may download, display and print it for Your own personal use. Commercial use is prohibited.
Näytä kaikki kuvailutiedot
Julkaisun pysyvä osoite on
https://urn.fi/URN:NBN:fi:amk-2021061015680

In the empirical part of this study focuses on one company and studies the differences in communication styles and cultures between Finnish subsidiaries and Japanese-owner of group companies from the perspective of members of Finnish organizations. In particular of the case of this study, it is assumed that communication is in English and that most communication is conducted in a situation where there is a physical distance. As Japanese companies expand into Finland, opportunities for communication between organizations in both countries are increasing, like as this case study.

Main findings are language skills takes an important role of between two organisations. Individualism-Collectivism, power distance contrasts between Finland and Japan and this difference appear in the relationship between superiors and subordinates in both countries effect communications in those two organizations and it may also influence decision-making. The concept of contextual culture can be a hidden issue, as most members are unaware of the differences.