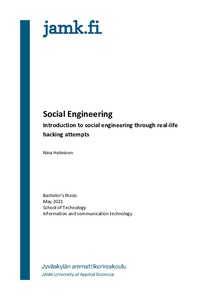 Helminen, Nina
All rights reserved. This publication is copyrighted. You may download, display and print it for Your own personal use. Commercial use is prohibited.
Näytä kaikki kuvailutiedot
Julkaisun pysyvä osoite on
http://urn.fi/URN:NBN:fi:amk-2021053112669

Social engineering is something that everyone is familiar in one way or another. We are dealing with it our everyday life without even noticing it. No matter if it is in work, holi-days, or our home, where there are people there is social engineering. Social engineering is influencing someone to gain something to yourself. Usually this is used unnoticed, but it can be used in a malicious and criminal purposes also.
The task was to investigate what different kind of methods are used when using social engineering by influencing others and how it is used as a tool in cyber-attacks. In theory section the methods were inspected more deeply. The statistics were analyzed what attacks were used the most and how many attacks have been done compared to other years.
Some real cases of cyber-attacks in 21st century where social engineering was used were examined more closely. Analyzing the attacks should give more knowledge of what should be made different and how to avoid the situations in the future.
Some guidelines were added at the end of study of how oneself could be protected against social engineering attacks. The problem was how to notice when under attack and how to be protected against such attacks. Companies are playing a big role when cyber-attacks have risen toward them and has become one of the larges threats to com-panies. Education of employees has been one of the solutions and still is the cornerstone of cybersecurity. As said, humans are the weakest link and that is where the social engi-neering attacks are made to target.