Internal Communication within a multi-campus University : Creating a sense of Community in the Faculty of Management Sciences 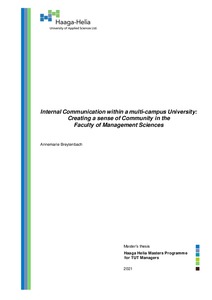 Breytenbach, Annemarie
All rights reserved. This publication is copyrighted. You may download, display and print it for Your own personal use. Commercial use is prohibited.
Näytä kaikki kuvailutiedot
Julkaisun pysyvä osoite on
https://urn.fi/URN:NBN:fi:amk-2021061516077

Reform of the higher education landscape in South Africa, resulted in institutions fused into multi-campus universities. Some of these were dispersed campuses that often are considerably detached by geography but at the same time combined into a single management system (Nicolson 2004, 351). Subject leaders or subject heads are responsible for subject content that should be standardised on all campuses; it is a big source of unhappiness if there is a lack of, or a breakdown in communication. This problem led to the following research question: How can communication, between staff members on different campuses, be improved to enhance the co-operation and output of quality teaching and learning? Part of the objectives was to develop a new communication model and to make suggestions to the faculty on the way forward.

A cross-sectional, quantitative, descriptive research study was utilised. The questionnaire was based on an internal communication model developed for Telkom (the South African Telecommunication Company) by van der Merwe (1998).

In general, the results of the survey indicated that there are only a few areas where improvement is needed. The most important areas relate to the value that a team member brings to the group, feedback on the performance of the team leader, the discussion of teams goals and objectives and linking the team performance and goals with that of the department

A model, based on the Telkom model, was developed. This model describes the internal communication process within a team, as well as all the environmental factors that have an impact on the communication and effective operation of the team.

It is suggested that a training programme should be developed that can sensitise the leaders as well as team members on effective internal communication that can lead to better team performance.