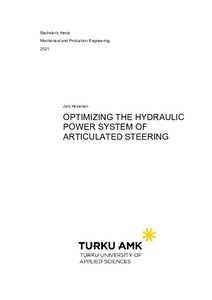 Heinonen, Jani
All rights reserved. This publication is copyrighted. You may download, display and print it for Your own personal use. Commercial use is prohibited.
Näytä kaikki kuvailutiedot
Julkaisun pysyvä osoite on
http://urn.fi/URN:NBN:fi:amk-2021061716286

This thesis deals with the energy consumption and features of the articulated steering hydraulic system of a mining loader. The purpose was to study the current hydraulic system and its improvement solutions. The system compared with the current one is a direct drive hydraulics, which is new technology.

Sandvik LH307B mining loader was used as the research platform. The study was made in three steps. In the first step, measurements were made with a load sensing hydraulics system, which is the original system of the machine. In the second step, intelligent control for the hydraulic pump was added to the load sensing hydraulic system, and measurements were made. In the third step, a layout of the direct drive hydraulic components had to be designed to the machine and installed according to plan. As many times with new technology, the system start-up encountered challenges, which had to be solved before starting the tests.

The theory part of the thesis dealt with the properties and requirements of articulated steering hydraulics in mine loading and hauling machines. The analysis examined the efficiency and properties of the hydraulic systems, which affect the choice of the system.

The load sensing system with the intelligent pump control gains significant energy saving without losing its features. With the direct drive hydraulic system there is a possibility to achieve an energy efficient solution. The system is operational, but there are still unresolved issues in the system after this study.