Possible risk of the dispersal of Gyrodactylus salaris following removal of migration barriers in a river : A case study at Kungsbackaån in Halland County, Sweden 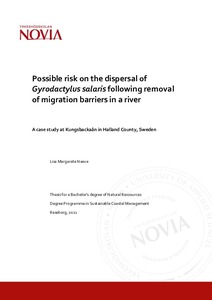 Possible risk on the dispersal of Gyrodactylus salaris following removal of migration barriers in a river (721.5Kt)
Lataukset:

Naeve, Lisa Margarete
All rights reserved. This publication is copyrighted. You may download, display and print it for Your own personal use. Commercial use is prohibited.
Näytä kaikki kuvailutiedot
Julkaisun pysyvä osoite on
http://urn.fi/URN:NBN:fi:amk-2021061716219

Gyrodactylus salaris is a salmon parasite, described for the first time in Sweden in the
1950s, occurring naturally also in Russia and Finland. During the 20th century it was
broadly introduced to other countries in Europe. Reasons are for example introduction of
farmed fish in natural rivers or the spread of parasites directly from fish farms into riverine
systems. G. salaris can cause lethal diseases in entire salmon populations of a river as was
seen in Norway in the 1970s.
This thesis is based on the principle of a scoping review and aims to give an idea of a
possible risk of dispersal of G. salaris into riverine systems by creating new spawning
grounds for salmon within river restoration projects. The research site Kungsbackaån in
Sweden is described and importance of river restoration to create natural spawning grounds
for salmon is highlighted.
In conclusion, a spread of G. salaris can be mitigated by precautionary actions and a
removal of migration barriers is favorable for the development of natural spawning
anadromous fish populations. If the parasite is once introduced into an ecosystem,
eradication is difficult. Eradication methods used so far can cause significant damage to the
ecosystem. It can be assumed that genetical features of salmon populations on the Swedish
west coast are the main reasons for the fact that no devastating G. salaris outbreaks have
yet been detected in that region.
Further research is needed regarding the parasite G. salaris and its characteristics such as
transmission routes or the parasite-host interaction, as well as environmental conditions
impacting the development of parasite populations. It is particularly important to
investigate the role of genetic differences in the host and parasite populations in the future.