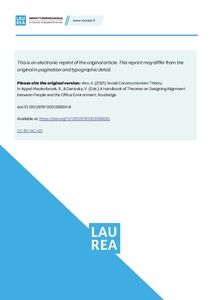 Workplaces and -spaces are considered either as physical entities or as abstract organisational locations. Physical space is seen as static and objective by nature, and place is designated as an area with psychological meaning. Social constructionism theory and perspective claim not only that physical space and cultural place steers users’ behaviour, but also that users’ conception of the space determines how the space is used, perceived and experienced.

The theory has been applied in workplace management research by looking into workplace phenomena and in modelling the spatial rhetoric employees’ use. Some studies about spatial language explain the usability of the workplace and the inclusive spaces. Sociolinguistic methods of discourse and narrative analysis are the most commonly used in social constructionist work. The chapter is based on the author’s doctoral dissertation from 2014.