Development of circular toolkits for a company : a vietnamese company as a case 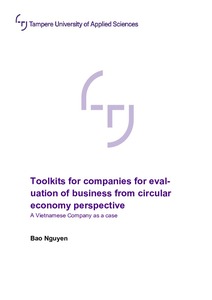 Nguyen, Bao
All rights reserved. This publication is copyrighted. You may download, display and print it for Your own personal use. Commercial use is prohibited.
Näytä kaikki kuvailutiedot
Julkaisun pysyvä osoite on
http://urn.fi/URN:NBN:fi:amk-2021062016432

The research methods applied in this study were literature review and empirical research. The literature review method was used in the theory part of this thesis to explore the concepts of circular economy, its principles, applicable circular design, and business models, as well as circular opportunities and barriers. The toolkits were developed based on secondary data from a book by Perter Lacy, combining it with the knowledge of circular economy in theory part. An empirical study included the analysis of the testing result and the effectiveness of the toolkits on the case company.

In conclusion, the study found that the toolkits were applicable and practical for companies. The toolkits focused on embedding circularity into three important dimensions of a company: Operations, Products & Services, Culture & Organization. By utilizing the toolkit, the companies understood more about the principles of circular economy and were able to launch circular initiatives into their current business. Besides, the toolkits are suitable for a company in the early stage of circular transition or in developing countries where circular economy concept is still unfamiliar. However, the toolkits were rather simple and straight-forward. This might decrease the effectiveness of the kits when being applied by mature companies. However, the toolkits can still be used as a checklist and an example of circular economy practices. More research is needed to improve the toolkits effectiveness such as adding more dimensions, in-depth analysis, and different industries.