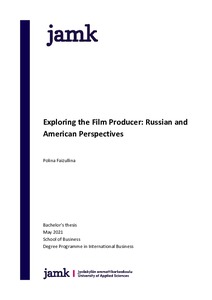 Faizullina, Polina
All rights reserved. This publication is copyrighted. You may download, display and print it for Your own personal use. Commercial use is prohibited.
Näytä kaikki kuvailutiedot
Julkaisun pysyvä osoite on
http://urn.fi/URN:NBN:fi:amk-2021062716674

It is widely accepted that the American film industry is one of the most successful in the world in terms of the number of films produced annually. Because the researcher is Russian and has some experience in the Russian film industry, curiosity was raised concerning the differences between the role of the producer in Russian and American perspectives. Therefore, the objective of this study was to explore differences between the process of film production in the United States and Russia. A review of the literature produced insights into the Ameri-can film industry. Primary data was collected through semi-structured interviews with working professionals who each have substantial professional film production experience in Russia. The semi-structured interviews allowed in-depth findings and information for the study. The flow of information was natural, and the re-searcher was able to ask additional questions when new ideas arose during the interviews. Subsequently, the data from semi-structured interviews was reflected on the theoretical framework in order to reach conclu-sions about the phenomena studied.

Based on the results and analysis, an understanding of the film producer’s profession and his or her functions was formed, and insights emerged from both the American and Russian industries. Possible ways of improving the Russian film production system are raised after examining the American industry’s examples. In addition, limitations of the existing study are described, and recommendations with suggestions for improving further research are provided.