The effect of brand function if an advertisement fails: One minute and 49 seconds that cost $8 billion 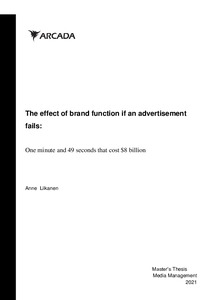 This research investigates the effect of brand functions as defined by Jean-Noël Kapferer on advertising, focusing on a poorly received advertising campaign. The material was sourced from YouTube for the advertisement: “The Best a Man Can Be” by Gillette. The negative reactions of the public regarding the campaign are explored
through three different research questions by using content analysis as a research method. Comments are categorized by using Kapferer’s functions as an classification frame. The intention is to understand the relationship of Kapferer’s brand functions to consumers‘ reactions in this particular case. The companies’ pursuit of commercial gain and at the same time the pursuit of authenticity and ethics is universal phenomenon and it extends beyond the business world. The study examines consumers' reactions to a particular type of advertisement, so the results say nothing about the general reactions of consumers. Given this limitation into account it can be said that this research brings new insights into how the consumer reacts to seemingly ill-fitting advertisement campaign. Through analyzing the comments, it can be observed that the brand functions, as stated by Jean-Noël Kapferer, seem to be working both for and against the companies ideals in equal measures. Furthermore, from this study it can also be ascertained that in addition to Kapferer’s eight brand functions there is also a political brand function as people seem to care about what political profile their consumption reflects. Social media in general has grown into a significant channel of influence and It is therefore important to continue to study its impact from the political point of view.