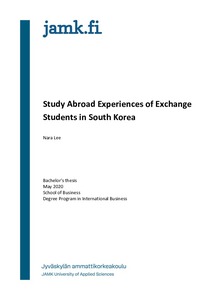 Lee, Nara
All rights reserved. This publication is copyrighted. You may download, display and print it for Your own personal use. Commercial use is prohibited.
Näytä kaikki kuvailutiedot
Julkaisun pysyvä osoite on
http://urn.fi/URN:NBN:fi:amk-2021062116446

Studying abroad is a wonderful way to travel to foreign countries and learn about other cultures. Thus, it is not surprising a number of university students around the world choose to live and study in other countries as exchange students.

The results showed that the participants expressed a range of reasons to come to Korea, that they experienced cultural similarities and differences, and that they faced significant challenges during the exchange programs. Based on the analysis of the results, recommendations are provided to contribute to the further development of Korean education and its internationalization programs.