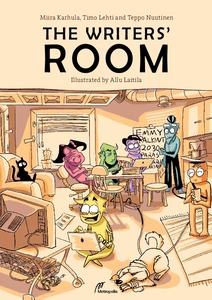 The term Writers’ Room is used to refer to the collaboration of multiple scriptwriters in the writing process of a TV series: sometimes it means the collaboration of a small team and sometimes a writing group of more than ten people. It appears that each head writer, series production and production culture has its own version of the writers’ room. Although the concept has no one definition, the success of streaming services has inspired a constantly growing number of writers’ rooms, also in Finland.

This publication verbalizes the key features of the writers’ room, describes the Virtual Writers Room model and discusses thoughts that came up during the Virtual Writers’ Room project. This publication is more of a conversation opener than an attempt to describe all the possible nuances associated with the writers’ room. It is written for students, professionals and anyone interested in the industry.