Study on electrocatalysis of 4-phenyl-1-butene 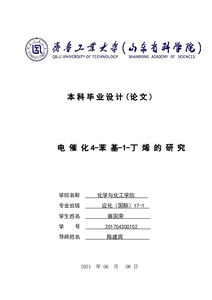 Guorong, Cai
All rights reserved. This publication is copyrighted. You may download, display and print it for Your own personal use. Commercial use is prohibited.
Näytä kaikki kuvailutiedot
Julkaisun pysyvä osoite on
http://urn.fi/URN:NBN:fi:amk-2021070616755

In recent years, the electrochemistry has been greatly developed. In particular, electrocatalytic strategies have been used to achieve C−C,C−O,C−N and C−S bond formation reactions. As is known to all, oxyhalogenation unsaturated hydrocarbon with halide ions has also been reported. So we would like to try nitrogen halogenation unsaturated hydrocarbon with halide ions. Traditional compositing conditions are usually limited, these include excessive use of strong oxidants, these kinds of reagents were often required in stoichiometric quantity and some of them were expensive and toxic, higher reaction temperature and lower atom efficiency.

In general, LiCIO4 as electrolyte, DMF as solvent, Chlorine source from MgCI2.6H2O, CeCI3 as catalyst, RVC(+)RVC(-) as electrodes in this laboratory work. The advantage of electrochemistry is environmental protection, easy to handle, low consumption and non-toxic.