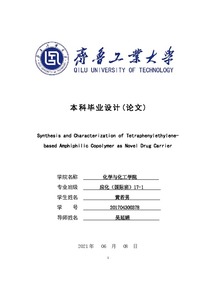 Huang, Ruonan
All rights reserved. This publication is copyrighted. You may download, display and print it for Your own personal use. Commercial use is prohibited.
Näytä kaikki kuvailutiedot
Julkaisun pysyvä osoite on
http://urn.fi/URN:NBN:fi:amk-2021070616759

Tumor drug treatment is one of the hot topics in modern society, and it has great potential for nanomaterials as drug-carrying systems. Most traditional fluorescent materials emit strong fluorescence in solution, but the fluorescence becomes weak in the aggregate state, and even quenched. Hexaphenylsilole emits a strong fluorescence in the aggregate state, which is completely opposite to the ACQ phenomenon. This kind of phenomenon in which weak fluorescence is emitted in the solution and the fluorescence intensity becomes stronger in the aggregate state is called "aggregation-included emission" (AIE). Such materials provide a strong and beneficial help for chemotherapy. Amphiphilic block polymers can be loaded with a variety of insoluble tumor drugs, and nanocarriers can become one of the hotspots of contemporary drug system research by virtue of their retention and accumulation advantages. Therefore, it is of great significance to develop a
new type of amphiphilic nano drug carrier with aggregation-induced luminescence effect. In this paper, tetraphenylethylene (TPE) is used as a material, based on the research theory of Academician Tang Benzhong and others, using experimental characterization data for comparative analysis, and synthsis a novel amphiphilic copolymer drug carrier.