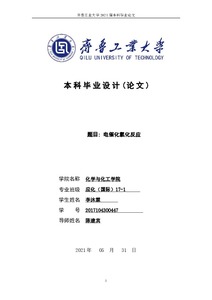 Li, Mulin
All rights reserved. This publication is copyrighted. You may download, display and print it for Your own personal use. Commercial use is prohibited.
Näytä kaikki kuvailutiedot
Julkaisun pysyvä osoite on
http://urn.fi/URN:NBN:fi:amk-2021070716772

Due to the development of the industry technology, more and more environmental problems are exploded which at the same time, the concept of green chemistry were born as the increase awareness of the environment protection. Chlorination, obviously, a reaction in which chlorine atoms are injected into a compound to form chloride is called chlorination, and in organic synthesis there are usually two reactions: displacement chlorination and addition chlorination. In Inorganic Chemistry, the reaction of an element or compound with chlorine is also called chlorination. In metallurgical industry, the extraction of metal with chlorine gas or chloride is also called chlorination, the chlorine gas is excited by High Energy and reacts to form chloride. However, we can see that normal industrial conditions often require very high temperature or strong light, high energy environment, at the same time, in industry due to the use of a variety of hydrocarbons, it is pretty easy to overheat the reaction, it will cause a combustion reaction, and a lot of raw materials are wasted, which is very uneconomical. Or some heavy metal containing catalysts are used cause the requirements of the reaction, unreasonable treatment of by-products will lead to serious environmental pollution ELECTROCATALYTIC reactions can be expressed as electron transfer reactions that are facilitated or always occur at the electrode by the presence of modifiers on the electrode surface or in the permanent night phase under the action of a power plant, a class of chemical reactions in which the surface of the electrode or the modifiers in the solution themselves do not change. ELECTROCATALYSIS is a kind of electro-chemical reaction in which the direction and rate of the reaction can be controlled by modifying the electrode material and the electrode potential. The electro-chemical reaction of the electrode material becomes electro-catalysis because it can not be modified. The base electrode of electro-catalysis can only be used as an electron conductor, and can also be used as an electron conductor with catalytic function.