Developing processes for networking of young entrepreneurs in Finland : Development project for the Federation of Finnish Enterprises 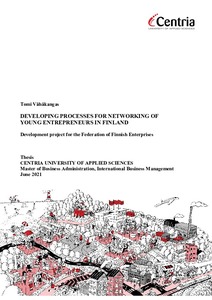 Vähäkangas, Tomi
All rights reserved. This publication is copyrighted. You may download, display and print it for Your own personal use. Commercial use is prohibited.
Näytä kaikki kuvailutiedot
Julkaisun pysyvä osoite on
http://urn.fi/URN:NBN:fi:amk-2021062716682

The background of this thesis was to develop the processes of networking that are beneficial for young entrepreneurs, so that the entrepreneurs could see the added value of being a member of the Federation of Finnish Enterprises.

The topic was approached with the theory of networking, networking enablers and the role of social media in professional networking. Previous membership research was introduced at the beginning of this thesis.

The survey was sent to 7757 entrepreneurs. Answers to the survey were collected from 748 entrepreneurs from all over Finland. The research results were analyzed using quantitative and qualitative methods. Because of the high amount of data received by the survey, some of the questions were left out of this thesis report.

The results received in this thesis were delivered to the Federation of Finnish Enterprises to further develop their processes in enabling young entrepreneur networking.