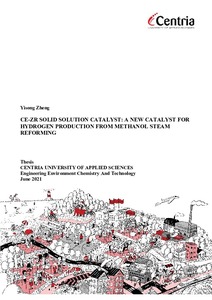 Zheng, Yisong
All rights reserved. This publication is copyrighted. You may download, display and print it for Your own personal use. Commercial use is prohibited.
Näytä kaikki kuvailutiedot
Julkaisun pysyvä osoite on
https://urn.fi/URN:NBN:fi:amk-2021092618062

In this thesis work, through the introduction of a variety of hydrogen production methods, and the comparison of a variety of hydrogen production methods, the methanol reforming reaction system is highlighted. In addition, Ce-Zr solid solution was prepared by sol-gel method, and CuO / Ce0.8Zr0.2O2 catalysts with different Cu content were prepared by impregnation method. The catalysts were characterized by H2-TPR, BET and XRD. The influence of Cu content on the structure and properties of CuO / Ce0.8Zr0.2O2 catalysts was discussed. It is expected to prepare CuO / Ce0.8Zr0.2O2 catalyst with high activity and high stability. Finally, the prospect and challenge of cerium zirconium solid solution catalyst for methanol steam reforming for hydrogen production were prospected.