Characterizing the Nonlinear Deformation of a Polypropylene Polymer. 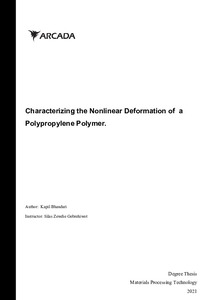 Kapil, Bhandari
All rights reserved. This publication is copyrighted. You may download, display and print it for Your own personal use. Commercial use is prohibited.
Näytä kaikki kuvailutiedot
Julkaisun pysyvä osoite on
https://urn.fi/URN:NBN:fi:amk-2021093018197

A polymer has both elastic and plastic region in stress strain curve. Material modelling is the process of modelling the stress strain behaviour using finite element method by computational software’s. Material models help to define relationship between stress and corresponding strain at any particular time period. There are several material models to describe the relation, some of them are Ramberg’s Osgood model, Uniaxial model, Power law, Ludwik’s model. when the applied load surpasses the yield strength then material starts to deform. Factors like time, temperature, material properties, load etc, affects the deformation. But only the time deformation using prescribed displacement under room temperature is analysed using Ramberg’s Osgood and Uniaxial material model of COMSOL. Using a Testometric machine, tensile test of a polypropylene as a thermoplastic was conducted. A sample piece(dog-bone) according to ASTM D368 type 1 of a polypropylene was used as a specimen. A prescribed displacement of 20mm/min was set for each test and a test lasted for approximately 21 minutes each. From the obtained data the stress strain graph was plotted. From stress strain graph the values of young’s modulus, Poisson’s ratio, strain hardening exponent, reference stress and strain were calculated. A time dependent model was modelled in COMSOL. From the Nonlinear module Ramberg’s Osgood and Uniaxial model was selected. The calculated values from experiment were substituted in each model. The obtained result was analysed using graphical observation. Deviation and Error analysis was done to find which model could best describe the behaviour.
During this thesis it was found; the result obtained from the Uniaxial material model to be close to experiment in compared to Ramberg’s Osgood. It should be noted that multiple temperature and strain rates are used to fully define the material behaviours. For other condition the next material model might give the best result. As expected, the experimental work is very much similar to the past research conducted on characterizing the nonlinear deformation of polypropylene.