How to deal with conflicts at the workplace in Vietnam? 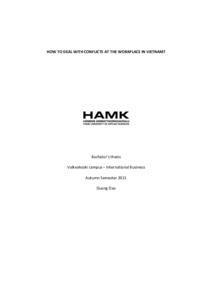 How to deal with conflicts at the workplace in Vietnam-đã chuyển đổi (1).pdf (956.5Kt)
Lataukset:

Dao, Duong Thuy
All rights reserved. This publication is copyrighted. You may download, display and print it for Your own personal use. Commercial use is prohibited.
Näytä kaikki kuvailutiedot
Julkaisun pysyvä osoite on
https://urn.fi/URN:NBN:fi:amk-2021100618387

This thesis aims to provide an in-depth understanding of workplace conflicts between Western and Vietnamese colleagues at several companies in Vietnam. The thesis focuses on an indication of cultural differences and diversity while identifying the possible conflict resolution styles.

Qualitative and quantitative methods were conducted in this study. Participants' interviews with the conflicting parties were undertaken to gather all the information, then later that information could be analyzed based on the theoretical framework described in the thesis. The analysis concluded that most cultural differences existed between the Western and Vietnamese colleagues, which resulted in negative impacts at the workplace. Further on, a guideline for future conflict resolution styles was given, and relationships after the conflict were shown to outline the future outcomes. Finally, some new solutions for the cross-cultural conflicts at the workplace were suggested to help the managers adapt to the new environment.