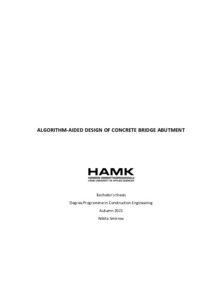 Smirnov, Nikita
All rights reserved. This publication is copyrighted. You may download, display and print it for Your own personal use. Commercial use is prohibited.
Näytä kaikki kuvailutiedot
Julkaisun pysyvä osoite on
https://urn.fi/URN:NBN:fi:amk-2021100718429

A bridge abutment is a bridge substructure that retains the embankment and carries the vertical and lateral loads from the superstructure to the foundation. The modeling process of a bridge abutment using traditional design methods is time-consuming and vulnerable to project updates that may lead to full remodeling. Using the design process of an abutment for a concrete girder bridge as an example, the thesis presents the innovative way of modelling that solves these problems.

This Bachelor’s thesis aimed to develop a parametric design tool for creating a 3D geometry of a concrete seat-type bridge abutment using an algorithm-aided design approach. The thesis consists of a preliminary study of algorithm-aided design, bridge design considerations and features of the bridge abutment which are later embodied in a design tool.

As a result, a fully functional design tool was developed using a visual programming tool called Grasshopper. The tool is developed to be used at an early stage of the project when the future shape of the abutment is being designed. The tool includes the built-in manual which allows bridge designers to use it even without knowledge of parametric design software. With this tool, bridge designers can easily create and modify the 3D geometry of the concrete bridge abutment by changing input parameters. The functionality of the tool was proved by creating two different geometry configurations of the concrete