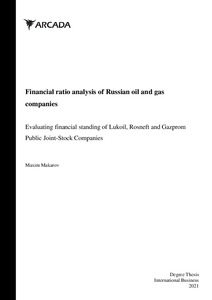 The research aims to perform an analysis of the financial performance of three energy companies to identify the most financially stable company. The author sets the main research question as Which company has the most stable financial position according to the ratio metrics within a 5-year period? The scope of the research is strictly limited and formed from the financial data obtained from the financial statements. The theoretical framework is divided into three sections. In the first section, the author is introducing the reader to the selected field of study from a larger scale, hence with the oil and gas industry. In the second section, the author explains the companies’ selection. Afterward, in the third section, the author discloses the core concept – meaning and application of financial ratios associated with the selected industry in this study. Considering the Cross-sectional and Time-series analysis of financial ratios, a quantitative method was selected. Given the financial statements as secondary data, primary data was generated out of them in the form of financial ratios which afterward were compared and analyzed. According to the results obtained in ratio analysis, Lukoil has the most stable financial position because it has the highest returns on capital and equity, one of the highest liquidities, the lowest debt leverage, and ultimately the highest dividend yield. Only in the Current and Price to Cashflows ratios, Lukoil scored lower than Gazprom, nonetheless, considering the leverage ratio group, both companies resulted similarly. In conclusion, the ratio analysis is only one part of financial stability analysis and to make comprehensive and holistic assumptions internal data of the company is needed. It is crucial to consider ongoing projects and have short-term planning of the company on hand to be able to gauge fairly on future prospective.