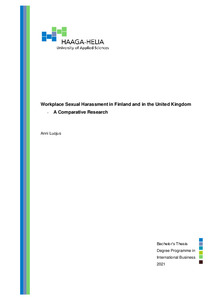 Luojus, Anni
All rights reserved. This publication is copyrighted. You may download, display and print it for Your own personal use. Commercial use is prohibited.
Näytä kaikki kuvailutiedot
Julkaisun pysyvä osoite on
https://urn.fi/URN:NBN:fi:amk-2021112421477

Workplace sexual harassment is a recognized issue which happens globally. The cases are not only affecting individuals, but also organizations and their success as well as employer brand. The topic is sensitive which makes it difficult for the organizations. However, the explosion of the #Metoo movement in 2017 brought the topic to everyone’s attention and now the discussion about the workplace sexual harassment is more normalized and open than ever before.

This thesis researches, investigates, compares, analyzes, and lists major differences and similarities in the phenomenon of the workplace sexual harassment between two European welfare countries, Finland and the United Kingdom. The qualitative research is implemented in a general level, in order to help the organizations to recognize and discuss the topic more neutrally. The research methods used in this theory-driven thesis are desktop research and literature review.

The large phenomenon of workplace sexual harassment is investigated in this thesis by researching different themes and categories around the topic. The differences and similarities are investigated and analyzed through four related investigative questions, which research the legal provision in both countries, the prevalence and most common cases of workplace sexual harassment, the #Metoo movement’s affects and also the ways on how the organizations are able to help and support victims and what kind of support is also offerred externally. This thesis does not focus on sexual harassment cases happening completely outside of the working environments.

The analysis is done by using both content and thematic analysis methods. Overall conclusion from the research states that the issues around workplace sexual harassment are occuring in both countries, thus the cases are often left unnoticed. The research showed that the two countries do share a lot of similarities when compared, for example, in prevalences of cases, as suggestive looks and inappropriate comments are experienced relatively often at workplaces in both countries. However, there are also major differences, for instance, in legal provision as Finland requires equality plans for every workplace with more than 30 employees.

By comparing countries it is possible to gain priceless information around the topic, which then again hopefully leads individuals in organizations to develop their tools and processes further, in order to prevent and intervene workplace sexual harassment cases more efficiently. The recommendations for further research are provided and include, for example, a repeated similar research after 10 years and a separate comparative research between countries and their certain fields of businesses.