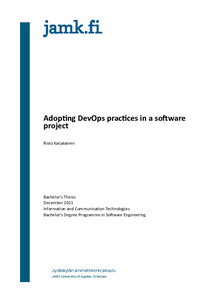 Karjalainen, Risto
All rights reserved. This publication is copyrighted. You may download, display and print it for Your own personal use. Commercial use is prohibited.
Näytä kaikki kuvailutiedot
Julkaisun pysyvä osoite on
https://urn.fi/URN:NBN:fi:amk-2021121325563

Bittium Wireless Ltd., the client of this thesis project, has a software project with multiple variants and target platforms. The project did not have a DevOps toolchain, and its development workflow relied heavily on manual processes and lacked visibility into code quality and build status. The goals of this thesis were to identify problems in the old workflow, to implement a new tool-based workflow in order to address the problems, and finally to evaluate the efficacy of the new workflow both quantitatively and qualitatively.

Semi-structured interviews were conducted for project members who experienced both workflows. All interviewees were satisfied with the new toolchain, seeing it as a positive factor for code and software quality. Especially code review and continuous integration were seen as beneficial, while SonarQube's code analysis gained less adoption.