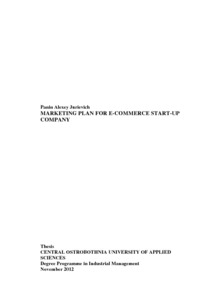 This thesis is a marketing plan as a part of the project of developing the e-commerce start-up business named Finnexport. The business itself was started in the year of 2011 and till the moment of this project was operating as an amateur company providing service of goods delivery from Finland to Russia only for close range of people. With a success of an idea and after shown interest towards the service from the third persons, the decision has been made to move the company from the amateur to the professional level with the future possible registering it as a joint stock company.

Due to the specificity of doing business online and big amount of competitors on the market many tools and methods of marketing and especially tactical marketing have been studied and analyzed. The most suitable of them are adopted and described in the main part of marketing plan. Before tactical decisions, the strategy of the company has been set based on situational analysis and analysis of competitors. Among all the competitors operating in the region of Saint-Petersburg three of the strongest ones have been selected and thoroughly studied with a following clarification of their strengths and weaknesses. Based on this data the company’s positions on the market have been clarified and SWOT analysis made with the following setting of marketing and financial objectives. Keeping objectives in mind the whole marketing program have been made together with detailed information of its budgeting, performance and implementation followed by describing of additional considerations in the end of the thesis.