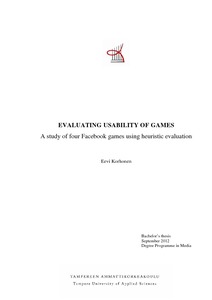 The purpose of this thesis was to explore the topic of usability in relation to Facebook games. To set the background for my research, I looked at the definitions of the terms ”social”, ”casual” and ”hardcore”, as they are often used to categorise and describe Facebook games. I also examined the advantages and disadvantages of developing games for Facebook and provided a short history of Facebook games.

The empirical part consisted of analysis of four Facebook games in the newly-emerged Town Defense genre. The chosen method for the analysis was heuristic evaluation. For this purpose, I utilised a set of 17 heuristics, which had been selected from other heuristic sets as well as some that were created to suit the platform and situation.

The results suggest that usability was still an issue in many of the analysed games. However, the performance of the games was uneven. Interestingly, the number of usability issues found and the popularity of the game had a near-inverse correlation. The more popular games also had the most usability issues.

The findings indicate that usability is not high on the list of priorities for the developers, but issues such as wealth of content, limited scope, lack of competition and a target audience that is more familiar with gameing conventions allow these games to thrive despite this.