Mining impacts on agricultural lands and food security : case study of towns in and around Kyebi in the Eastern Region of Ghana 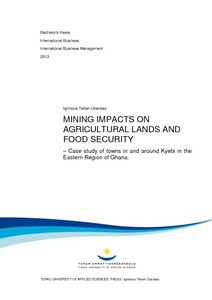 Natural resources are very important for development and production processes however, they can never be substituted for agriculture, food and farmlands. Mining businesses or process seem to be taking the place of farming activities and in the process rendering the lands unproductive and not usable.
The evidence presented through out this research has shown the various impacts of mining activities on farmlands and the extent to which it has affected food production and security in towns in and around Kyebi in the Eastern Region of Ghana.
The influx of mining companies in the study area showed that mining activities within the region of study has in many ways affected the livelihood of the people by displacement, relocation and even resettlement.The socio-economic, environment, and the lives of the inhabitants of the catchment area are adversely affected by mining activities which has led to food shortages, land degradation, water pollution, high cost of living, food price hikes and many other factors.
The findings reveal the commonest problems in the study area were physiological disorders and bacterial diseases followed by scorch and fire. This was mostly because of the pollution caused by the chemical used in the mining processes. The chemicals pollute the soil and even the air leading to poor crop growths. Due to the vast nature of mining, many trees are cut down making the place bare for easy wind and water erosion thereby reducing soil fertility that has led to poor crop cultivation.
Though there has been instances of some settlements and cooperate responsibilities from the mining companies, it is yet to be established the engagement of the communities and mining firms to address the increasing effects of mining on agricultural lands and food security. It is therefore proposed that the various stakeholders must have an effective model of communication that leads to a co-operation in mining related farmland-enchroachment in the area.