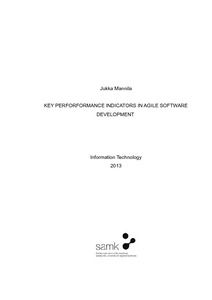 The study was implemented by evaluating agile software development related books and internet sources to identify recommended key performance indicators and select some of them for the organisation use. During the evaluation it became clear that available material amount is limited and it was decided some workshops would be held to initiate new measurements in the organisation. The outcome of the workshops was a number of measurement proposals. The source data from books, internet sources and workshops were documented and a summary table with usage recommendations per a measurement was done.

The organisation's key performance indicators currently used were also documented to give some background data about the current measurements in the organisation.

By using the data in the summary table recommended measurement proposals were selected and documented. For the selected measurements more accurate data relating to scope, time period, organisational level, measurement type, targets and responsibilities were defined.

The outcome of the study was the actual measurements which were taken into use in the organisation. Future work directly resulting from the study will be the automating of the source data collection and the reporting of the measurement data in a dashboard.