Inventory of closed and abandoned mines : Methods for performing the inventory and for risk classification with diverse data availability levels 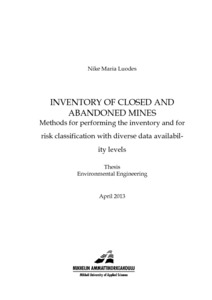 The traditional mining techniques have not been aware of the importance of the long term effects that the mining activity can cause: the main being represented by Acid Mine Drainage where chemical changes in sulphide rich tailings can bring in solution heavy metals, penetrate through the containing structure access and accumulate in the environment. The abandoned and unstable facilities located on the site can by their own represent risks for people and animals accessing the area. Several countries have been active in drafting an inventory of the sites in order to understand those that can represent a severe risk and on which it is prioritized a further intervention.

The approach adopted by European countries, making the inventory in response of the updated “Mining Waste Directive”, Directive 2006/21/EC has focused on the waste facilities representing a severe risk, while the methodology adopted by Extra-EU countries has included the whole mining
site. In the thesis it is given an overview of methodologies adopted by selected European and extra European countries to understand which would be the best approach for performing an inventory in different data availability areas, which tools could be used and which results could be expected.

The main approach would be to perform a risk based inventory using source-pathway-receptor model including the whole mining site. The main steps would include collection of bibliographic data from conventional and alternative sources, giving high importance to map and information relative to previous incidents, kind of mining techniques and refining processes, metals extracted and chemicals used during the process. These would help mainly in forecasting risks associated to chemicals. Map relative to geographic position, hydrology, geology, land cover would help in understanding the
paths and the possibility to reach receptors. Comparison of historical images, correlated to bibliographic data, could help in understanding the impacts given by the mining activity during the time.

In this framework GIS has been recognized as valid working tool. Besides the analysis of bibliographic information, that can be few in low data availability countries, field examination helps in defining the risks related to safety and pollution. When the data are not even enough to understand a mining site, it is probably important to perform two field inspections,the first to define the area and the second to perform the tests. Visual examination, field basic tests
and laboratory tests are listed, considering that depending on the data availability of the area could be reached a Tier 0 or Tier 1 during the inventory. So the first basic collection of data over which the site could be recognized to pose a severe risk or not, constituting a base for further site assessments and decisions