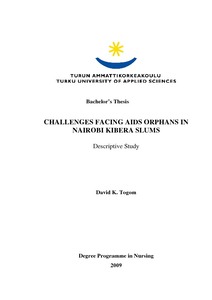 The purpose of the study was to investigate the challenges faced by HIV orphans in Kibera slums. The study was prompted by the presence of many orphans within Kibera and other slums in Nairobi city where many parents have died due to HIV/AIDS and related complications. The pandemic has brought social and economic disaster with far reaching implications to the communities. The methods used to collect the data were literature review and semi structured interviews. With the help of a community social worker, the author conducted a field work study in various parts of Kibera slums and made observations, took pictures and interviews. A sample of ten HIV/AIDS orphans participants were interviewed during the research process. The results of this study showed that orphaned children and their families are facing economic, psychological and social problems, which are hindering them from accessing basic needs and services. The findings also revealed that AIDS orphans especially the girls heading their household are the most vulnerable to various kinds of problems and they are overburdened by shouldering adults’ responsibilities of care giving to the siblings and other members of the family. Based on the findings of this study, and due to the fact that the impacts of having many AIDS orphans are multidimensional and complicate, the author made some recommendation on how to support and care orphans and other children made vulnerable by HIV/AIDS.