The effect of anaerobic biogas process on plant diseases : Case S.subarctica and S.sclerotiorum 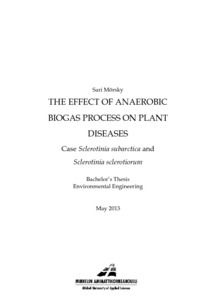 This research studied the survival of two Sclerotinia species and their reproductive capability in mesophilic anaerobic biogas process, Sclerotinia species cause crop losses for instance to vegetables. The digestate from the biogas process can be utilised as an organic fertiliser and it can substitute mineral fertilisers. However, there is a risk of plant pathogens and human pathogens in the digestate if it is not treated properly. In addition, plant pathogens can be really persistent and tolerant to high temperatures and other variations in environmental conditions. The aim of this study was to find out whether the mesophilic biogas process is sufficient enough for eliminating plant pathogens, especially S.sclerotiorum and S.subarctica and thus, can the digestate be utilised as an organic fertiliser without the risk of plant pathogens. This study was a follow-up on a partly EU-funded project in the Mikkeli University of Applied Sciences: ESBIO- Biogas plant as a part of the energy self-sufficient farm, which ended in 2012.

Sclerotia of Sclerotinia sclerotiorum and Sclerotinia subarctica were put into the mesophilic biogas process for 21 days and grown on PDA-agar for 14 days and the results were observed during cultivation. One batch from each experiment had a batch with pre-hygienisated sclerotia. There are no previous studies related to the survival of either of the species in the mesophilic anaerobic biogas conditions. Also the biogas and methane yield were measured alongside with anaerobic digestion assay and biodegradability of the process was analysed.

The results indicate that digestate can be utilised as a fertiliser without the risk of plant pathogen contamination. Neither S.sclerotiorum nor S.subarctica remained vital after the mesophilic biogas process according to cultivation experiments. This can be, amongst other things, due to the temperature combined with 21 days retention time, volatile organic compounds or due to anaerobic conditions. There were neither remarkable differences between the biogas and methane yield and biodegradation between pre-hygienisated batches and non-hygienisated batches.