Smart Phone Business in Vietnam: The Role of Brand and Culture in Consumer Decision 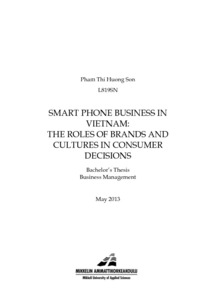 The main objectives of this study were to discover the purchasing incentives of the Vietnamese smart phone consumers, as well as their major concerns during the decision-making process. Brands and culture are the main aspects that were taken into consideration in order to highlight the differences behaviour between the Vietnamese consumers and those from other countries, especially the more developed countries. Therefore, Finland was used in the research as a reference group from developed countries. Moreover, a profile of Vietnam-ese smart phone buyers and the performance of some smart phone brands in Vietnamese market were also developed.

By revising previous studies, the paper developed a theoretical framework of the smart phone consumer behavior. In the model, buying motivation was expected to come from utilitarian and/or social, discretionary needs, whereas marketing strategies, reference groups, word-of-mouth, country-of-origin, brand knowledge and social values were proposed to be the driving factors. The framework was later tested in an empirical approach, which involved the interviews of two anonymous customers from both Vietnam and Finland; and the surveys were answered by 35 and 45 people from Vietnam and Finland respectively. Several analyz-ing methods, such as crosstab and correlations tests were executed to examine the data col-lected. Lastly, the results and limitations of the study were discussed while suggestions for further research and implications for managers were also mentioned.

It was found that the motivation and characteristics in the decision making process for the product differed between Vietnam and Finland greatly even though the final pur-chase decision of the product was somewhat similar. Vietnamese consumers tend to see smart phones as a tool for better quality of life both practically and socially, with the buying inten-tion mainly coming from the need to support work and daily life. Also, Vietnamese customers along with Finnish customers concentrate on attributes of a smart phone such as capacity, design, function, along with brand, and price are observed to have the most impact on the final decision. Finally, the United States of American and South Korean smart phones are highly valued by both Vietnamese and Finnish people.