Refroms in public administration, Comparative study of Sopron and Seinäjoki 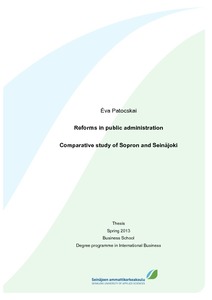 The thesis focuses on government science. In the study, several indicators of economic status in Hungary and Finland are presented, as well as some of the ongoing reforms. The chosen corner stones of the study are Sopron and Seinä joki, related to which the administrative details of the ongoing reforms are presented. The author chose the aforementioned two localities, because she completed her studies in Sopron and Seinajoki, and has been writing her thesis in the latter.

In the first part of the thesis, the reader is introduced to the economic situations in these two countries. Furthermore, the administrative systems and the reforms implemented in both countries are dealt with. After that, the economic situations of the surveyed cities and their roles in the region, as well as the impact of the ongoing reforms on the cities are presented. When choosing the topic of the thesis, the aim was to prioritize a case affecting all the residents directly or indirectly in Sopron and Seinajoki. The reasons for introducing the reforms in both countries were different. In Hungary, the main reason was to facilitate the public administration of citizens, the establishment of state control over the government's windows with electronic administration and with the help of a new district system. The triggering factor of the reforms in Finland was to ensure the quality of public welfare and health services. In the thesis, the problems that led to the reforms and the offered solutions are explored, and their consequences in these two cities are examined.

At the end of the thesis, the future impacts of the reforms on Seinajoki and Sopron are summarized.