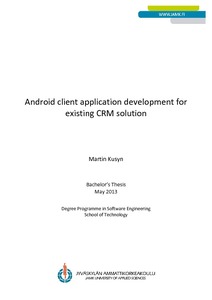 This bachelor's thesis focuses on the development of client application for Android operating system for mobile devices. The final application serves as a client for RAYNET Cloud CRM, an existing CRM solution.

The first part of the thesis contains brief introduction of RAYNET s.r.o. , the creator of RAYNET Cloud CRM, introduction of the CRM system itself and brief description of its functionality and implementation. Requirements of the mobile client application are discussed and its user interface, behavior and control are suggested.

Resolving of the application requirements brought several issues that have to been solved or bypassed. These issues include several problems related to incompatibility between different versions of Android operating system and also introduces several advanced techniques of Android programming and describes used libraries.

The major part of the thesis is dedicated to implementation of the application itself. Particular functionality of most important UX components is described as well as authentication model, data obtaining workflow and usage of accounts and services.