Long QT Syndrome : A Pamphlet for Community Awareness in Prevention of Sudden Cardiac Death in the Young 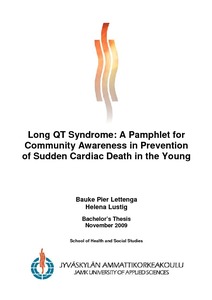 The project was conducted with the purpose of producing a pamphlet, in conjunction with Sydänlapset ja -aikuiset ry, for public education in Long QT syndrome (LQTS). This was undertaken in the hope of, as previously mentioned, informing the public of LQTS and thereby decreasing the risk of sudden cardiac death in regards to LQTS. In the thesis information was gathered dealing with LQTS in addition to information on proper pamphlet compilation. Whereby the information was condensed and used to produce the pamphlet. The pamphlet was then given to Sydänlapset ja -aikuiset ry in electronic form to be placed on the world wide web for members of the public to print and use as needed.

The theoretical background was based on information gathered from various research papers regarding LQTS and pamphlet production. Information was also gathered from various foundations such as the Sudden Arrhythmic Death Foundation (SADS). Upon completion of the theoretical portion, a pamphlet was produced containing basic information regarding LQTS. In order to check the pamphlet for readability, educational contents and overall attractiveness the pamphlet was presented to nursing staff of Jyväskylä Central Hospital whereby feedback was attained in the form of a questionnaire. Additionally the pamphlet was also shown to various members of the public to confirm that the language and terms used in the pamphlet were simple and easy to understand. Thus, the information compiled included a description of LQTS, information regarding the compilation of educational material for public dissemination and lastly feedback received from nursing staff regarding the pamphlet and its educational value.

Overall, the feedback received was positive; fifteen nurses from Jyväskylä Central Hospital paediatric ward participated in the pamphlet’s evaluation. Feedback was gathered with the aid of a 13 point questionnaire. Various recommendations were made by the participants and taken into consideration by the authors. Necessary changes were made to the pamphlet whereupon the final electronic version was sent to Sydänlapset ja aikuiset ry. According to the feedback received the pamphlet was universally seen as useful, necessary and practical.