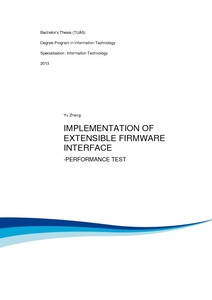 During the last 30 years, the performance of the various components in PCs has been increased constantly following Moore's Law. As the most important part, BIOS is responsible for connecting the PC hardware and software, initializing the PC and system boot. Such a key technology, however, has not been improved with the rapid development of PC technology. BIOS’s immutability and drawbacks has become an obstacle to the development of PC technology. In order to solve the limitations of the traditional BIOS, Intel developed a new generation of alternative to the traditional BIOS named Extensible Firmware Interface (EFI) in 2000. Compared with traditional BIOS, EFI has incomparable superiority. It not only solves most of the drawbacks of traditional BIOS but also provide users with a more powerful and perfect service with a new design concept.

The main purpose of this paper is to learn the theoretical of computer structure and elaborate the future theory related to EFI. The thesis is structured as follows. The first chapter contains a detailed description of the traditional BIOS in the computer, then an introduction of how the BIOS function in the computer's boot process and finally an analysis of the EFI advantages compared with the traditional BIOS. The second chapter introduces the basic principles of the EFI including EFI system boot process, boot manager, system tables, services, protocols, handles and the EFI Shell. In addition, a detailed instruction of seven stages is also suggested according to the Framework working based on EFI standard. Finally, a comparison test is conducted about start-up characteristics with EFI BIOS and the traditional BIOS platform as well as demonstrate how users can benefit from using EFI BIOS. As a principle, EFI also belongs to the BIOS. In order to facilitate the distinction, in this thesis the BIOS used by customers and outside the EFI standard are referred to as traditional BIOS.