A. Saanko luvan?” : sound and visual performance (appendix 1) : B. Music performance as a whole visual and sound - canons and diversions 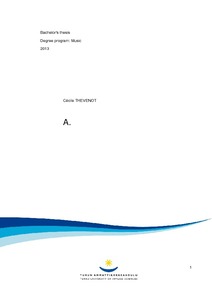 When music is performed, in any case, it's part of a representation. That is the main question
exposed in this written work. How to understand a concert as a whole including its visual and sound sides whether it's thought as part of a creation or pretend to not exist.
The first part introduces how the music is directed and represented in traditional classical concert spaces. This thesis attempts to approach in a wider way a common classical concert event. Why not to present the whole ceremony as a performance including its visual and sound components, spectators and performers both acting. The aim is to underline the specific canons of representations developed in that world. A strict classification between different
functions, spectators, interprets; conductors and composers have been settling down. Corollary different worlds have been created and stay separated. Moreover I try to question why the
music valued and played during that kind of events comes only from dead composers.
Secondly, through the figure of Mauricio Kagel I point out a composer who interrogates during all his life those conventions. He doesn't follow common classifications and allows himself to cross the borders between arts and disciplines. Composer but also theatre director, film-maker,
his work is rich and diversified. The genre of “Instrumental Theatre” will be a space to experiment for the composer his views. Kagel wish to think the totality of the spectacle
combining sound and visual elements. He tries to re-find the holistic experience of music.
Further I analyse one singular work of the artist: Ludwig Van (a double piece, film and scenic work) to highlight Kagel's interest in German musical tradition.