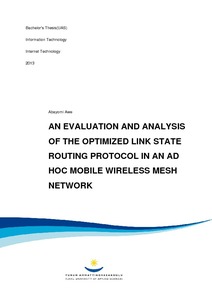 Recent developments in computing and wireless technology have opened up new technologies for the future of mobile networking. The advent of mobile networking has lead to popularity of Mobile ad hoc network(MANET) over the decade, it have has drastically increased because of their network dynamic nature, sometimes rapidly-changing, multi-hop technologies which are likely composed of bandwidth consisting of wireless links.

A MANET is a network built on multi-hop where nodes can move freely in the topology. The network operate based on no infrastructure and can work as fast as possible in any environment. The optimized link state routing protocol (OLSR) is a the protocol for route management for such mobile ad hoc networks.

OLSR operates on the link state algorithm that maintain topology information of the network at each node by employing periodic exchange of messages because of the proactive or table-driven nature of the protocol. The process of optimization on OLSR in a pure link state protocol combines the size of information sent in the message which, is followed by flooding these message in the network into order to reduces the number of transmission.

The thesis is based on research of wireless mesh network using OLSR as the routing protocol through the network.