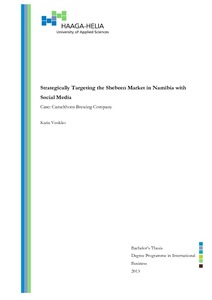 Social media strategies are essential for SMEs such as microbreweries that want to interact and engage with consumers with little cost. Social networks such as Facebook, Twitter, Youtube and LinkedIn provide a platform for online conversation and can be used to better understand a target market.

The aim of this thesis is to investigate how Camelthorn Brewery Company can use social media to strategically target the shebeen market in Namibia. The scope of the thesis covers legally trading shebeens in Windhoek’s lower income area, Katutura. This three-phased research examines the target market using multiple sources of data in- cluding observations, interviews, previous studies, and statistics. The research was car- ried out from December 2011 to April 2012, the priority and core of which is qualita- tive data and quantitative data added additional insight on the topic. The exploratory mixed method research consists of a relatively small sample size due to limitations such as time, language barriers, insufficient shebeen facilities and suspicions from respondents. Also, no previous studies studies on the potential of the shebeen market was found, but rather studies focused on the negative impact shebeens have on the local communities.

Research found that Camelthorn Brewing Company should segment the shebeen market into a business market of shebeen owners/managers, and a consumer market of Windhoek city dwellers and tourists as a target audience. Social media has been used by microbreweries to gain a loyal following for their beers and can be strategically used by the company to get to know the target market, educate consumers and start a craft beer movement in Namibia.
Guided by their social media strategies, an initial 90-day social media plan will allow Camelthorn Brewing Company to form partnerships with shebeens and gain better insight into their target audience’s needs.